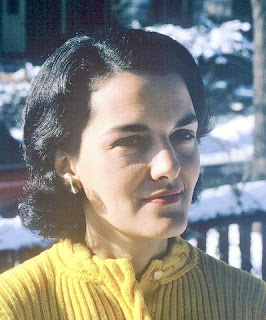 One of the most rewarding things about working on Wednesdays in Mississippi is the opportunity to meet, sit with and talk to amazing, thoughtful and inspiring women. Geraldine Zetzel is one of these remarkable women. We recently "discovered" her and hope to film an interview with her in Boston soon.
Geraldine went to Mississippi in 1964 as part of the Team #2 from Boston, MA. She decided to take the journey south out of her own concern "for justice and equality". She also went because her dear friend Alice Ryerson asked her to come with her.
Geraldine Zetzel, 1961
Like many of the Wednesdays' women, Alice's daughter Susan was a SNCC volunteer in Mississippi that summer. Northern women went south not only to support local women, but to support the incredible efforts of the young people who had dedicated their summer to fighting for racial justice. They went as activists and as mothers.
Today, Geraldine lives in Cambridge, MA. She is a poet, teacher, activist and student of Buddhism. To read some of her poetry, go to http://www.poetrybookdesign.com/poet.html
In 2001, Geraldine wrote an article about her experiences behind the "cotton curtain". These are the memories and words of a woman who had the courage to get out of her arm chair and make a difference.

In the early summer of 1964, Polly Cowan contacted Alice Ryerson, a friend who also summered on Martha’s Vineyard, about the project. Alice’s daughter, Susan, was then working in Mississippi as one of the volunteers, so Alice was eager to go. She recruited me to go with her.

Members of the group:

Beginning with the plane to Jackson, the feeling of being in enemy territory. (N.B. This was shortly after the disappearance of the three young civil rights workers. Everyone was very tense. We had been briefed and instructed not to act as though we were traveling as a group...)

Ruth Batson comments that she didn’t know the trip was to be “segregated.” None of us comfortable about this.

The effort not to notice whether people are noticing us--one beady-eyed lady watching us all, especially Ms. Hyams. Noting that the flight attendants’ sweet Southern expressions of professional solicitousness never varied, but wondering what they say when they go off duty.

Arriving in Birmingham, everything so beautiful from the heights--why can’t it BE that simple? Green round trees, pine-woods, little farms, rust-colored earth plowed and sown, green crops coming up. Neat houses with shade trees and pools. Birmingham airport all pale blue and cream. (Getting off and being met, I remember being painfully conscious of having to split up into Whites and Blacks--it felt awful.)

In the limousine from the airport to the hotel in Jackson, feeling uneasy about the extra passenger we didn’t know--what if he’s a Citizen’s Council spy? When the bellhop brought up our bags, he turned at the door and very pointedly said to us, “If there’s anything you need, ask for Dale...” We were sure he knew who we were and why we were there. We felt protected by an underground, a network.

Day 2. Laya, Alice and I went with a Jackson lady, Ms. Schutt to a meeting of the League of Women Voters at the house of Mrs. Rawls. There were about 12 women present, only two of them Jackson natives--the others had lived there varying lengths of time. After some preliminary socializing, someone asked, “Now tell us why you’re here?” Alice replied it was out of concern for the volunteers. This brought a flood of answers, about inflammatory statements the students were making, letters they’d written, and rumors that they were all “beatniks” and mentally disturbed. Ms. Rawls exploded, saying that we didn’t know anything about race relations, we’d never lived with Negroes, etc.

A very lively discussion ensued, with many differing points of view. The level of intimidation included, we learned, that L.W.V. members’ husbands were told to have their wives withdraw from “that Commie’ organization. Many speculations about the motivation of the civil rights workers--including the question of how any mother could ALLOW her child to live in a Negro family’s house--complete astonishment when Alice said she was proud of her daughter (the group was incredulous, having assumed her child was male!) Suspicion voiced that not all were really legitimate COFO workers, or that they all had been screened and trained before coming.

About the three workers who had disappeared, the women said 75% think they’re hiding, many believe in a conspiracy theory, that they were deliberately killed by CORE & SNCC as a way to enable the federal government (or the U.N.) to “take over” Mississippi.

A moving speech by Ms. Scutt, who hadn’t wanted to believe that Blacks were being intimidated or oppressed, but has come to see that it’s so. Mrs. Moore reported talking it over with her husband and small children, and deciding to go ahead and commit herself to the civil rights cause. Another mother who reported that neighbors wouldn’t let their kids play with hers because they talked about “brotherly love.”The fear of talking to others and finding themselves on different sides of the issue. An Englishwoman who asked what she should say to her son when he said, “I want to sit in the back of the bus.” Discussion of guilt feelings, and of lack of contact with any educated Black people. The sense that Jackson is different, the problems are in the country, in other towns.

We drove to Canton, at that time a town with about twice a many Black as White inhabitants. Our driver tried to follow a little map, but we got lost. The driver explained there were no lights and few street-names in the Negro section of town, and in the white sections “it’s an occupational hazard--we can’t ask directions to the COFO offices--for obvious reasons.” Indeed we got lost, and when we stopped at a store to ask directions--it turned out to be a white-owned store. Right after that we began to be followed by two men in a pick-up truck--the Deputy Sheriff’s. The driver said, “They’re here to protect us,--or so we should make them think...”

In the course of this day we visited Freedom House, two Freedom Schools, a Catholic mission, the Community Center, and met with many COFO workers and community leaders. Here are some of the names:

Mrs. Robinson, host family for one of the student workers, & adult literacy teacher

We saw great things going on with the children in the schools and community center. A lot of creative and courageous work was going on with the kids, trying to offset the poor schooling and the messages about inferiority that they’d gotten in their regular schools. We heard many stories of the struggle for voter registration, of harassment and intimidation, of persistence and of small victories. Many attempts to reach out to the white community, and always the effort to conciliate rather than confront. It was an exhausting, exhilarating, scary, and yet hopeful day.

At the end of the day, because of a mix-up, we had to drive back to Jackson in “racially mixed” cars--by then we were so tired that we even got silly--I remember Sister John waving out the window at the Sheriff, still following us around in the pick-up.

That evening, we met at Mrs. Davis’. Also present were;

Unlike the evening with the League of Women Voters, this group were individuals who were committed to the cause of civil rights. The discussion was about the current climate, that the state really is the worst, “occupied Mississippi”, where the governor openly talks of non-compliance. The fear that “a generation will come along with a wrong idea of law.” Experiences of intimidation, but also hopeful that FBI presence is helping, and the glare of publicity. Urged our group to go back and speak out about things we’d seen and heard. Some debate as to whether what we’d seen and experienced that day was genuine--specifically that the volunteers had “dressed up” to make a better impression on “the ladies”. Their usual sloppy dress has been an issue--to them it’s a political statement, i.e. that outsides don’t matter, so Black and White are the same--also a way of showing that they don’t care about the things of this world. To many young people, the Movement is a kind of religion--this is part of what makes others see them like Communists.

Later, in our rooms, we had a sort of pajama party--unwilling to stop talking, reluctant to have the experience come to an end. Sitting on a bed with Sister John, barefooted, talking way into the night. The next day, as we left, a newspaperman from Chicago wanted to interview her. Again there was a sense of paranoia--the desk clerk was unfriendly, my companion. Alice R. quite sure that if as she hopes, her daughter Susan (volunteer in another part of the state) calls , the hotel staff will deliberately not let her know.

For me, the Wednesdays in Mississippi experience made a lasting difference. I was moved, frightened, enlightened--and impressed with how little I had previously understood. The civil rights struggle became a reality, where before it had been an abstraction. I also had a window into the nature of life in the South, not only the conditions under which Blacks were living, but of what it was like for Whites of good conscience to deal with their history. I was again and again overwhelmed by how much courage people of both races and of all ages showed in dealing with the racial--and racist--realities of that time.

Posted by WEDNESDAYS IN MISSISSIPPI at 8:46 AM